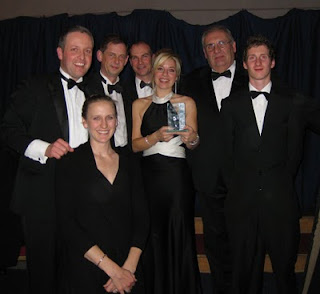 Our sister company Trafalgar Wharf was awarded third place for Team of the Year at this year's The News Business Awards. They recently completed their first year of trading as Trafalgar Wharf, and they are based at the old Vosper Thorney Croft site in Portchester. I was fortunate enough to be invited along to the ceremony and what a brilliant evening it was. Trafalgar Wharf pride themselves on providing a first class service to the marine industry, the fact that they were nominated, not only for Team of the Year but also for Business of the Year and Community Contribution is testament to Simon, Lisa, Tony and Phil's efforts in making Trafalgar Wharf the award winning business it is so early in its inception. I do have to mention Jonny and Louise Boys also. Jonny is the Managing Director of Trafalgar Wharf, Thornham Marina and JBT Marine our other sister company, if you want to see what they get up to you can log on to their web site. Not one for resting on his laurels he is understandably a very busy man, but never too busy for any of his teams should they need his advice. Louise has also been very involved in the operation of all 3 companies and specialises in the bigger/short term projects.

The team at Thornham congratulate the team at Trafalgar and wish them the very best for this coming year.