In our last newsletter we asked our boat owners to send in any sailing adventures or stories for the Blog. Martin Hopton, who has wintered at Thornham for several years and now owner of ‘Shemar’ pictured below, kindly sent in his amusing account of his Pacific crossing on a 38ft Rival in March 2009. 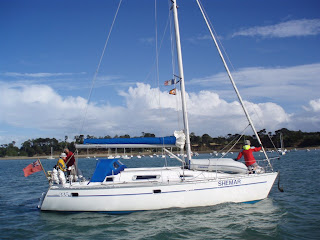 This is a précis of the adventure; for the very entertaining full length version just send Jeanette an email info@thornhammarnia.com and she will forward it to you.
On March 27th 2009 the three intrepid sailors set off on 'Takaroa' heading for the French Polynesian Islands over 3,000 miles away. After a few days the Trade winds picked up and with favourable currents ‘Takaroa’ made good progress. With the sails winged out and a rolling sea the crew was rather uncomfortable but secure.
A daily routine of heaving to at midday for a swim around the boat was soon established followed by Pimms and lunch. One of the crew, Bill, was quickly appointed Head Chef with Martin taking the role of Sous Chef responsible for hearty breakfasts, coffee breaks and regular afternoon teas plus the inevitable washing up.
As it is dark in the Tropics from 6pm to 6am skipper, Trevor, set up three hour watches in rotation.
‘There was an overwhelming feeling of being alone in the universe with no other ships or planes to see just the stars. ‘Martin recounts ‘It was very peaceful and quiet apart from the eerie blowing of whales that seemed to be nearby.... or were they?’
Although ‘Takaroa’ set off with plenty of fresh water on board supplies started to run a little low. Luckily two nights of torrential rain sorted this out with rainwater collecting on the Bimini cover channelling down a pipe to refill the tanks. After a while fresh food was also in short supply until the crew caught a huge spearfish which fed them for a week! Surprisingly there was not much wild life to be seen apart from flying fish which regularly landed on the deck and the dolphins that came to play in the bow waves. 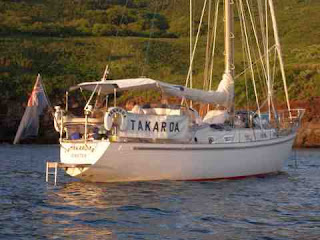 On Sunday April 19 land was sighted after a passage of 3,055 miles which took 23 days and five hours. The crew anchored ‘Takaroa’ in the Baie de Hanavave in the Marquesa Islands and still firm friends reflected on their great achievement.
Email ThisBlogThis!Share to TwitterShare to FacebookShare to Pinterest